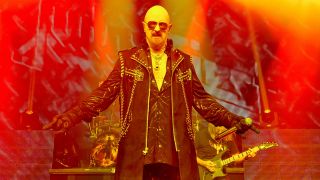 Judas Priest frontman Rob Halford believes he’d have died years ago if he hadn’t dealt with his drink and drug addictions.

He believes he was one step away from being “lost” before entering rehab in 1986, after his partner’s suicide forced him to face up to his issues.

The singer – who’d struggled with keeping his sexuality a secret – told VH1 Behind The Music in 2001: “My daily routine was, I would get up around six in the evening and slug down some big bottles of whatever just to get out of bed.

“I was ripping phones off the walls, trying to drive drunk, just a really obnoxious, hateful son of a bitch. I just hit those moments of such complete despair and confusion.”

Asked about how sobriety has affected his longevity, Halford tells the Washington Times: “Without it I’d be dead. Literally, I’d be dead. I wouldn’t be here. The place where I got to, the next step was lost.”

He continues: “I love people. I love being in a band. I love making music. I had to figure out that was way more important than being addicted.”

Priest guitarist Richie Faulkner reports that the band are preparing for a songwriting session and that they’re fully focused on recording the follow-up to 2014’s Redeemer Of Souls.

Halford adds: “That’s the life, really – you write, you record, you play. And it never grows old. The future looks great.”

He and Faulkner are taking part at Los Angeles’ Rock And Roll Fantasy Camp programme.

Halford says: “It’s very much an experience that brings a lot of skills and discoveries about yourself together. It also enables you to learn that being in a band is a lot tougher than sitting around and playing guitar in your bedroom.

“You really have to try and find a way to communicate, to respect each other’s opinions and ideas, to be able to fight for something you feel is better than somebody else’s idea.

“It’s making new friends – helping people realise something that could be very, very important to them. And also learning something about yourself as a musician. We’re looking at these campers, and we know what’s going on in their minds. because we’ve been there.”

The Story Behind The Song: Judas Priest's Breaking The Law