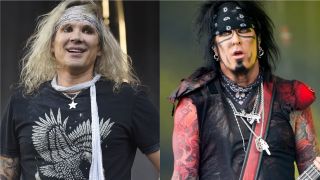 Sixx lashed out at Steel Panther in October last year, calling them a “wanna be” band after Starr made a joke about Crue singer Vince Neil in an interview with Little Punk People.

Sixx said Starr could “go fuck himself” after putting down Neil and later branded the band “backstabbers”.

That led Steel Panther drummer Stix Zadinia to respond to Sixx, saying: “Sounds like someone needs some fucking attention.”

However, in a new interview with Little Punk People, Starr says he hopes the situation has now calmed down.

Asked if he thought Sixx was still mad at him, Starr replies: “No, I don’t think so. I follow Nikki Sixx and Vince Neil on social media and I’ve been liking stuff because he likes to post stuff from back in the day.

“Hopefully that thing was just like a blip in the heavy metal news. I think if we were to run into each other, I would totally be, ‘What's up, dude?' The last thing I want to do is have a band that influenced my musical taste and direction be mad at me.

“But sometimes there's really nothing you can do about that kind of stuff. You just have to live with it."

He adds: “It wasn’t mean to be mean. People were saying, ‘What are you doing? Why are you guys arguing?’ I was like, 'Yeah, you're right. Why are we arguing?' It's silly.’

“I know if we were on a festival or in the same room, I'm not going to ignore the guy. I'm a fan. I'm going to go up and say hi. And if he wants to not be my friend, then that's one thing, but I would totally walk up to him and say hi. Jokes are jokes.”

Steel Panther will take part in the Concert To Save The World live stream on June 7. A portion of proceeds will go towards Live Nation’s Crew Nation relief fund at the Heavenly Pets rescue centre in Los Angeles.