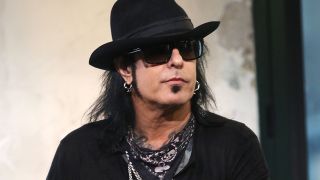 Motley Crue bassist Nikki Sixx has hit out at Steel Panther, calling them a “wanna be” band.

Sixx wasn’t happy with Steel Panther’s vocalist Michael Starr, who made a joke about Crue singer Vince Neil in an interview with Little Punk People.

Asked in the interview if they could bring one metal god back from the dead to play in Steel Panther, Starr said: “I’d bring back Vince Neil.”

After drummer Stix Zadinia pointed out that Neil was alive, Starr added: “I’d bring back the Vince Neil from back in the day, because THAT guy’s dead. He’s gone.”

That led Sixx to hit out at Starr on Twitter, saying: “The singer in Steal Panther (sic) can go fuck himself… wanna be band putting down Vince Neil.”

One fan pointed out that Steel Panther play Motley Crue covers live and have had Neil join them on stage in the past, which led Sixx to reply: “That’s why they are assholes. Backstabbers.”

The singer in steal panther can go fück himself… wanna be band putting down @thevinceneil ?October 18, 2019

That’s why they are assholes. Backstabbers.October 18, 2019