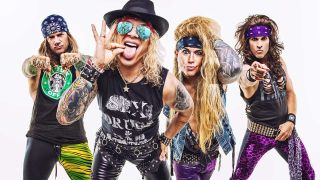 Last week, Motley Crue bassist Nikki Sixx lashed out at Steel Panther, calling them a “wanna be” band after Steel Panther’s vocalist Michael Starr made a joke about Crue singer Vince Neil in an interview with Little Punk People.

Sixx said Starr could “go fuck himself” after putting down Neil and later branded the band “backstabbers”.

But Steel Panther drummer Stix Zadinia responded after Sixx’s Twitter comments, saying: “Sounds like someone needs some fucking attention,” and added: “In order to stab someone in the back, you have to have been somewhat cordial to begin with.”

You might have thought that could be the end of the matter, but Steel Panther weren’t done yet.

The band then unearthed an interview with the Crue from when they were promoting their self-titled studio album with vocalist John Corabi in 1994 – two years after Neil left the group.

The clip shows Motley Crue responding to the news that Neil had sustained injuries during a jet-skiing accident – and their responses weren't exactly sympathetic.

Sixx has yet to respond.

In order to stab someone in the back, you have to have been somewhat cordial to begin with.October 18, 2019