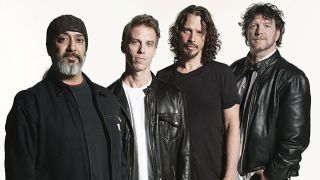 Author Greg Prato has released a book charting the history of Soundgarden.

It’s titled Dark Black And Blue: The Soundgarden Story and along with exploring the band’s history, the publication features contributions from artists including Matt Pinfield, Dave Wyndorf, Phil Anselmo, and Marky Ramone and also includes rarely seen photos of the band.

The synopsis reads: “In addition to dissecting and analysing all of their albums, readers will learn about the stories behind many of their classic songs such as Black Hole Sun, Jesus Christ Pose, Outshined, Hands All Over and Flower, as well as recollections of tours, goings on behind the scenes, and singer Chris Cornell's surprising and tragic death in 2017.”

Dark Black And Blue: The Soundgarden Story is available to purchase through Amazon, while a collection of excerpts are available on the Song Facts website.

Earlier this year, Soundgarden's career-spanning Live From The Artists Den was released on 2CD, 4LP, limited edition 4LP, Blu-ray and as a deluxe box set, featuring the 29-track concert film, with more than 30 minutes of bonus interviews on multiple LP, CD and Blu-ray formats.

Last week, Cornell’s daughter Toni released the song Far Away Places which was produced by the late vocalist.

Soundgarden: Live From The Artists Den
Soundgarden's show from Los Angeles in 2013 was released back in July on a variety of platforms, including this deluxe box set featuring a wealth of bonus material.View Deal