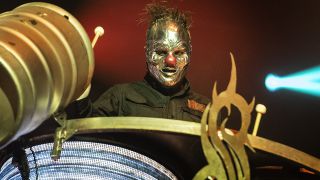 Slipknot fans are being given the chance of a lifetime by the band’s Shawn ‘Clown’ Crahan.

As part of Knofest online’s Electric Theater event, the Slipknot co-founder and percussionist is asking fans to create their own unique mask and share it with him.

Clown explains: “It can be executed from scratch, or by turning an already existing mask into your own piece of art. I’ll be highlighting my favourite ones, and some of you will be chosen to participate in a live chat with me while wearing your mask in front of the world. Get creative. Stay sic.”

The Electric Theater is a part of Knotfest online’s ongoing series of events which are running on the festival’s website due to the 2020 live shows being cancelled because of the coronavirus pandemic.

Last Friday, fans were able to watch a live stream from Swedish outfit In Flames when their full headline set from Wacken Open Air 2018 was broadcast on the site.

This coming Friday, a special festival streaming event will be shown, with further details to follow – and on June 19, at 10pm BST, the website will show Suicide Silence’s 2015 benefit show in aid of Mental Health America. The headline set was captured at The Observatory in Santa Ana, California.

The new issue of Metal Hammer magazine, which is on sale now, is a special tribute to late Slipknot bassist Paul Gray.

As well as an in-depth look at Gray’s story and the influence he had on Slipknot’s music, the magazine also features a special collection of tributes from around the metal world.

Plus, the issue comes with £10 of exclusive bonus digital magazines and a brand new, specially curated digi-mag counting down the 20 greatest Slipknot songs ever – and the stories behind them.