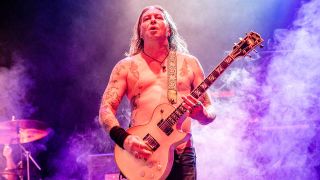 Sleep frontman Matt Pike has revealed to Metal Hammer that he turned down the opportunity to perform at Coachella festival in favour of Roadburn festival, despite Coachella offering much more money.

The stoner metal pioneers are scheduled to perform their Holy Mountain album in full at Roadburn next April, plus another set focusing on their latest album The Sciences.

“We love that festival and we love Walter who puts the festival on,” Matt tells Metal Hammer. “We sorted it so far in advance that, at present, that’s the only thing that we have planned for next year. We aren’t even booked anywhere so far, so there’s lots of scheduling that we need to do... but we actually turned down Coachella because of Roadburn!

“Coachella actually pays more, but fuck that, we want to do Roadburn! I see Coachella as a new kind of Lollapalooza, and it’s an odd thing for us to be involved in – although it would have been good press, I guess. There’s actually this clause for it that says you can’t play anywhere else for six months after it – so fuck that! I’ll make more money if I don’t play it and I’ll be happier at Roadburn!”

Roadburn takes place in Tilburg, Netherlands, on April 11-14, and this year is curated by At The Gates vocalist Tomas Lindberg. Already confirmed to perform are Cave In, Heilung, Old Man Gloom, Thou, Birds In Row, Drab Majesty and more.

“It’s special, and it’s always been special; the people that go there, the people who put it on, it’s very real,” says Matt about Roadburn. “I go there and just wander around and make sure I try and see every band there that I want to see, and believe you me, there are always a lot of them!”