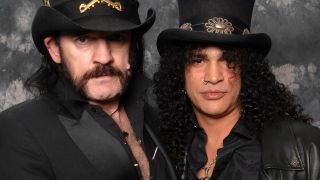 Slash has recalled some of his memories of Lemmy and says that the world is a lesser place without him.

The guitarist was speaking with Revolver when he was asked about the late Motorhead leader’s legacy.

Slash says: “Lemmy was such a fucking awesome individual. We were good friends since we met in 1987, which is when Guns N’ Roses first went to London.

“Motorhead was doing a record. We went down to meet them for the first time and we all hit it off. Lemmy and I kept in touch and became good friends over the years.

Slash continues: “For years and years, I could be anywhere in the world and somehow Lemmy was there. The planet is a lesser place without him. I really miss him a lot.”

Slash recently spoke to Classic Rock about his relationship with the Motorhead frontman.

“Lemmy was one of my all-time favourite fucking human beings,” he said. “When he got sick, it turned out that what he was suffering from initially was the same thing that I had been, which was this Cardiomyopathy thing.”

The British Heart Foundation describes Cardiomyopathy as “a disease of the heart muscle which affects its size, shape and structure”.

“It’s where your heart enlarges to the point where it has no where to go,” says Slash. “Which was just from excess. Mine was from alcohol and his was probably from speed or whatever.

“So I told him that I had been through that and I told him what to do. So we sort of went through that together and he actually did pretty well. A dab of this, a dab of that, but he was- he really changed his whole thing. But, unfortunately, because of his age, all the things that had been dormant – with the amount of chemicals he was taking that shut all that shit from happening – all of a sudden surfaced. And so, he had a lot of kidney problems, and this problem and that problem. But he was a fucking tough motherfucker. He kept working through it.