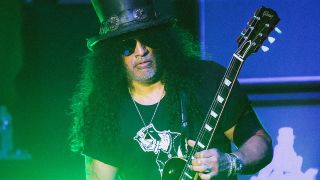 A post on Guns Over Oz said: “A source who was working on Terminator: Dark Fate has informed that four members of Guns N’ Roses went to a private viewing of a rough copy of the upcoming Arnold Schwarzenegger sequel movie to see if they want to put a song on the soundtrack.

“Apparently, Slash was at Axl’s house to record overdubs on a song for the rush release. At this point the song name is unknown. But yes 100% verified. Guns N’ Roses new music."

However, Slash has poured cold water on the rumours telling SiriusXM’s Trunk Nation (via Blabbermouth): “There's nothing in the Terminator movie. These rumours, they take off and then they get a life of their own. And you can't reel them in. They just sort of get tossed around in the wind. Anyway, there's nothing in there, in that.”

Slash went on to discuss his work with Myles Kennedy And The Conspirators, telling host Eddie Trunk that he’s happy that the public now see them as a “real” band, rather than simply a “short-lived project.”

Slash says: “The main thing I got out of the last Conspirators run was the material on the album was really well received and I felt like we had arrived as a band that people see as something that’s actually real.

“Because, for the longest time, Conspirators was sort of one of those hybrid things that people think will just pop in and pop out and just see it while it’s around – a short-lived kind of project.

“Slowly but surely it sort of established its place as its own band and we started to gather a legion of fans, so I think we’ve really arrived at a place where people have accepted it as being a real thing – and that’s a great feeling because we always took it seriously.”

Slash Featuring Myles Kennedy And The Conspirators will release the live package Living The Dream Tour on September 20 through Eagle Vision.

Guns N’ Roses, meanwhile, will head back out on the road on the latest leg of their Not In This Lifetime tour on September 25, when they play at the Spectrum Centre in Charlotte.