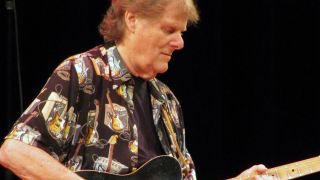 Session guitarist Reggie Young has died at the age of 82. He passed away last night at his home outside Nashville.

Amongst his most famous contributions are guitar parts on Dusty Springfield’s Son of a Preacher Man, Presley's Suspicious Minds and In the Ghetto, and the iconic intro to Dobie Gray's Drift Away.

Born in Caruthersville, Missouri, in 1936 and raised in Osceola, Arkansa, Young was a prodigy guitarist, and picked up work backing rockabilly singer Eddie Bond after the family moved to Memphis. After two years in the army he joined Bill Black's Combo, most famous as being the opening act on the Beatles first US tour.

“I didn’t have a clue who they were until we got to San Francisco," says Young. "The first night we played the Cow Palace. I’d never heard that much screaming and carrying on. They had barricades so the kids wouldn’t jump up on the stage."

Country star Travis Tritt paid tribute to Young, saying, "Very sad to hear that legendary guitar player Reggie Young has died. Reggie played on most of my 90’s albums and was the most recorded studio guitarist in history...

"Known for the famous guitar lick on Dobie Gray’s Drift Away - he also played on so many other artists records (Elvis, Waylon, Hank JR. to name a very few). Moreover, Reggie was a genuinely nice and humble human being. My deepest condolences to his family."

The photo of Reggie Young is licensed under the Creative Commons Attribution 3.0 Unported license. Photo by Jeremylr68.