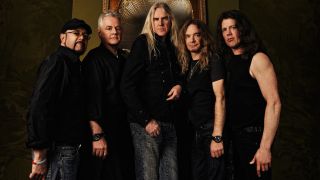 And he says the follow-up to 2013’s Sacrifice is likely to be released in the autumn.

Byford says: “Some of it is quite brutal – but there’s quite a lot of melodic stuff on there as well. Every Saxon album is different to the one before because we like to entertain people and we don’t really like to write the same song all the time.”

He adds of the band’s progress: “I have a vocal to do and there’s maybe two more guitars and we’re finished. So I think the album will be out in October, perhaps even September.”

Saxon are currently touring the US with drummer Nigel Glockler back behind the kit after undergoing emergency brain surgery last year.

The NWOBHM icons appear at the TeamRock-sponsored Ramblin’ Man Fair in Kent on July 26-26. They’ll also play Hard Rock Hell 9 in November. Hear the full interview with Byford on the latest episode of The Metal Hammer Magazine Show via TeamRock Radio’s on-demand service.

Saxon to tackle devil and taxation