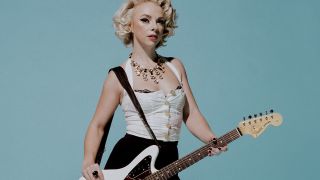 It’s titled Kill Or Be Kind and it’ll arrive on August 30 – Fish’s first on her new label Rounder Records.

Fish has also released two tracks from the follow-up to 2017’s Belle Of The West and Chills & Fever in the shape of Watch It Die and Love Letters, both of which can be listened to below.

The album and singles’ news comes just as Fish is preparing to embark on her UK and European tour, which will get under way at The Sage 2 in Gateshead later tonight (May 7).

A full trackist for Kill Or Be Kind, along with the cover art, will be revealed in due course.

Speaking about her career, Fish said: “I’m never gonna be a traditional blues artist, because that's not who I am. But it's all the blues for me.

“When Muddy Waters and Howlin' Wolf came out, what they were doing didn't sound like anything that had been done in blues before.

“You've gotta keep that kind of fire and spirit. I'm never gonna do Muddy Waters better than Muddy Waters, so I have to be who I am and find my best voice.”

Find a full list of Fish’s upcoming tour dates below.