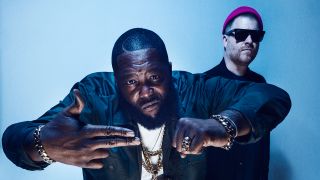 Run The Jewels have released their fourth album, RTJ4.

Surprising their fans with the new album days before it was scheduled to be released, the band took to their social media channels to announce RTJ4 was now available digitally, with a physical release following in September 2020.

The record features Zack De La Rocha and Josh Homme among others, and is the follow-up to 2016's Run The Jewels 3.

"Fuck it, why wait," the band said in a statement on their social media channels. "The world is infested with bullshit so here's something raw to listen to while you deal with it all.

"We hope it brings you some joy. Stay safe and hopeful out there and thank you for giving two friends the chance to be heard and do what they love."

The album is available for download and physical pre-order now. While downloads are free, the band are urging fans to donate to US charities instead of pay for the album if they can.

According to a statement on their site, donations will be going to National Lawyers Guild Mass Defense Fund: "The Mass Defense Committee (MDC) is a network of lawyers, legal workers and law students providing legal support for political activists, protesters and movements for social change.

"MDC members in chapters across the country provide trainings, assistance in setting up temporary legal offices and legal support structures, and materials for supporting activists engaged in mass protests."

Check out the album in full below, head to their site to download, pre-order and donate.

Run The Jewels 4 is out now - FREE on our website and avail everywhere you listen to music.4️⃣: https://t.co/lVVpCDq2xp pic.twitter.com/KNaPMfPKuJJune 3, 2020