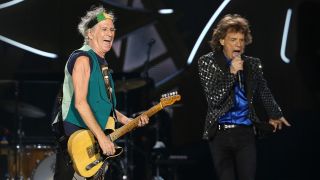 Rolling Stones guitarist Keith Richards has owned up to waking up in the night to write down things that might wind up bandmate Mick Jagger.

But he insists there’s nothing negative in the pair’s constant bickering.

Richards tells Mojo: “Mick and I joust with each other all the time. From my end it’s never been a fight.

“Mick’s a control freak – it’s necessary for him to believe he’s ‘numero uno.’ Most of the time I go along with it, unless I think he’s making a really wrong decision affecting the Stones.”

He adds: “We enjoy jousting. I wake up in the middle of the night sometimes and jot down a line. ‘I’ll save that one for him.’”

Meanwhile, Richards – who’s been in trouble for drug-related incidents many times in his life – is delighted to see marijuana being legalised across the US.

He says: “I smoke regularly, an early-morning joint. One of the most pleasant things to watch is a map of America where it goes green, green, green.”

He’ll release solo album Crosseyed Heart on September 18, and he’s considering touring on the back of the release.

And Richards says of the Stones’ future: “Will we record and tour again? I think we will. We’ll do this year, then go into the studio.”