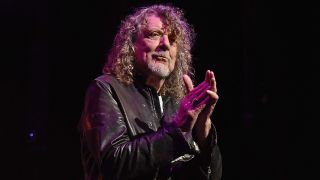 Saving Grace featuring Robert Plant and Suzi Dian have cancelled their planned appearance at this summer’s G! Festival in the Faroe Islands.

They were due to perform on July 18, but have walked away due to the country’s whale hunting operation – known as Grindadráp, leaving festival bosses furious.

In a statement on the festival’s website, it's reported that the decision was taken by Plant after he received "negative publicity / pressure from environmental conservation organisation Blue Planet Society."

The festival's managing director Sigvør Laksá says: “We’re disappointed and annoyed with the cancelation. We’ve been excited and happy with the massive interest and the positive reception to the announcement of Saving Grace – especially the Robert Plant fever that naturally comes with it.

“It seems somewhat unprofessional for these acts to pull out of a booking without any prior notice or attempt at constructive dialogue, which might have allowed us to address the artist’s concerns.

“It also appears contradictory when an artist is happy to play in countries like Norway and Iceland – which carry out commercial whaling – which Mr Plant has done in the past, even in 2019.”

Laksá adds: “This is a severe blow for the festival, which forces us to rethink our approach in producing the G! Festival.”

Grindadráp is a traditional event which goes back centuries in the Faroe Islands and sees residents hunt species including long-finned pilot whales. The mammals are herded towards shore by fishing boats and other vessels, where they are then killed on the beaches.

According to IUCN Red List, Grindadráp is a sustainable practice as the long-finned pilot whale is not an endangered species.