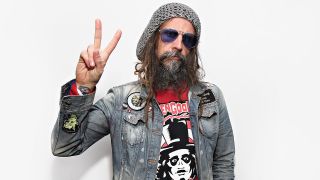 In July last year, Rob Zombie confirmed he had completed work on his new studio album.

But with his time taken up with his new horror flick 3 From Hell, which will open from September 6-18, and his summer tour with Marilyn Manson, Zombie remains unsure as to when it’ll see the light of day.

He tells Revolver: “The record is done, and the movie is done, and now we're just figuring out how to release these things, and deal with them while still being on tour.

“With a record, even though MTV and all these old concepts are gone, you still need to make a shit-ton of video content, because that's how people get to the music. So it's just a matter of figuring out how to find time to do all that."

Zombie and Manson kicked off The Twins Of Evil: Hell Never Dies Tour in Baltimore last night, with Zombie saying he won’t debut any of the new material on the road this summer.

He explains: “First of all, nobody wants to go to concerts and hear songs they don't know. Nobody. And if they say they do, they're full of shit!

“Second, if you do that, everybody films it and puts it on YouTube, and starts pre-judging something they don't even know about. When we do put it out, we'll put it out perfectly: You'll have your record, your artwork, your videos etc.”