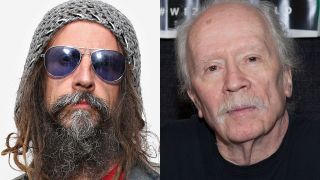 Carpenter created the original in 1978 and Zombie oversaw a 2007 remake, then later said that Carpenter had been “very cold” to him when they discussed the project.

Speaking to film students recently, Carpenter said: “Nothing could be further from the truth. I said, ‘Make it your own movie, man. This is yours now. Don’t worry about me.’ I was incredibly supportive.

“Why that piece of shit lied, I don’t know.”

Yesterday Carpenter tweeted: “To everyone fascinated with the JC/RZ feud, old news. We spoke Sunday. We buried the hatchet. Let’s move on.”

The veteran director had also criticised Zombie’s take on Halloween, saying there was too much backstory on lead character Michael Myers.

But Zombie told Classic Rock in 2014: “You have a lead character who doesn’t speak, you don’t see his face and he’s always hiding in the shadows. That’s kind of limiting.

“That’s why I decided to have so much backstory – so that when he didn’t talk you could kind of project how he was feeling from what you saw before.”

Zombie’s latest film 31 just launched in the UK and arrives in the US in October. Carpenter tours the UK next month, performing music from the soundtracks to his movies.