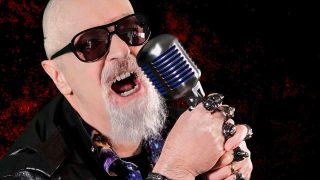 It's been a busy month for Judas Priest. First, the band were nominated for the Rock And Roll Hall Of Fame. And then Rob Halford released a Christmas album, Celestial.

Now the Metal God has revealed a further ambition: he wants to be a judge on Ru Paul's Drag Race. “Get all the drag queens in full-on metal," he says. "Let's do it, Ru!”

Halford revealed the ambition in an interview with Yahoo News, saying, "I just love that show just for every emotional dimension of what's being presented… the interaction, and the support, and the fun, and the bitchiness, and all this kind of stuff. It's great. It's a beautiful insight to a part of our world and it's really important. It has a tremendous amount of value."

Halford goes on to praise Ru Paul's show and Queer Eye, saying, "These things are wonderful opportunities for people that don't know about us. Just to look and listen and learn. That whole thing about we are your bus driver, we are your nurse at school, we are your judge court. We're their airline pilot. We are everywhere.

"Even today we're about to get to 2020 and we still have to talk about this. Particularly in this current climate here in the U.S. it's terribly, terribly difficult. Especially what's going on in Washington.

"Let me quickly say I'm not an American citizen yet; I'm working on it. But when I say ‘we,’ I mean we as people, as family here in the U.S. We've been practically ignored by this current administration.

"We were forging so far ahead with the previous administration, and now we are pushed to the sidelines, and I think that's a terrible disservice. It's insulting. And thank God that [Trump] won't last forever."

Halford, who came out as gay live on MTV in 1998, told Metal Hammer three years ago, "I think it’s kind of amusing that I have absolutely no relationship with the gay media whatsoever – not that I’m looking for it either. I’ve never been approached by any of those kind of publications because I think heavy metal is still viewed by the wider media as still being this very macho, male environment and the gay media still treats it with some detachment."

In September, Halford revealed he plans to publish an autobiography in 2020, while the frontman has also revealed that Priest have "vaults full of riffs" ready for their next album.