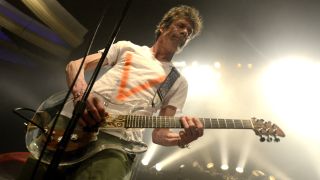 Replacements frontman Paul Westerberg appears to be sending a message to fans via shirts worn on their reunion tour.

He’s performed with a different top every night, featuring one letter painted on the front and another on the back.

A group of fans, running a Facebook group called Paul’s Shirt have collectively worked out the letters form two 19-character sentences. They predict that the message reads: “I have always loved you. Now I must whore my past.”

Billboard speculates that the message could be Westerberg’s attempt to let fans know he’s not happy with the band’s current incarnation. They reformed in 2012 after 20 years and Westerberg and original bassist Tommy Stinson are joined by drummer Josh Freese and guitarist Dave Minehan.

An album was said to be in the works – but manager Darren Hill said in April that the band had suffered a number of “false starts.”

The last two dates of the Mats’ Back By Unpopular Demand reunion tour take place tonight (June 2) and tomorrow at London’s Roundhouse, where Westerberg is expected to complete the message.

The Replacements return to TV