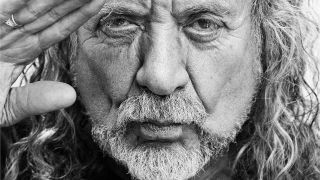 It’s been a long time coming, but this month we're delighted to say we managed to collar restless creative spirit Robert Plant for The Classic Rock Interview, in which the music legend takes us through his solo career, his new podcast passion and what he’s up to next.

Elsewhere we hang out with Airbourne in Russia, visit Taylor Hawkins at home, go record shopping with Joe Elliott, remember drumming giant Ginger Baker, and talk to a whole heap of stars to discover their favourite songs from the Rolling Stones.

Issue 269 of Classic Rock is on sale now.

Airbourne
Hot off the back of their best album yet, the Aussie rockers take the “universal
language” of rock’n’roll to Russia.

Phil Campbell
The former Motörhead guitarist has been talking about doing a solo album for 20 years. Now it’s finally here, with help from some big-name friends, it shows that Old Lions Still Roar.

Robbie Robertson
“It was a crazy ride, an unbelievable ride. And a dangerous ride…” The Band’s chief sonic architect looks back at their legacy and tells all about his new solo album.

Jimi Hendrix
One minute he was unknown, the next was burning through the music world like a comet. In this exclusive extract from Mick Wall’s new book, it’s sex, drugs and rock’n’roll to the max.

Taylor Hawkins
He’s expanded his horizons outside the Foo Fighters with a star-studded solo album. Classic Rock visited him at home, living the dream.

What's on the free CD?

Get Rocked!
“Do you wanna get rocked?” Def Leppard posed the question, and here are 12 tracks from the best new rock bands who’ve responded in style, including Southern Smoke, Hit Dogs, Dramalove, Blind Shapes and more…

The Stories Behind The Songs: Focus
Originally a “cabaret song”, reworked as a rock track Sylvia helped pave the way for the band’s rapid rise to fame.

Six Things You Need To Know About… Starcrawler
They’re retro but don’t call them retro, the singer’s rock hero is Ozzy, and if you see them up-close live take wet-wipes.

Buyer’s Guide: Opeth
From death metallers to progressive rock-metal torchbearers, their 25-year evolution is as impressive as it is surprising.

The Soundtrack Of My Life: Rich Robinson
The Magpie Salute main man on why Rod Stewart, the Stones, Nick Drake, Moby Grape and more are so important to him.

Classic Rock 269 is in UK newsagents now, and available to buy online.