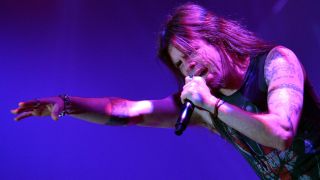 The frontman reveals they have 15 songs written and ready to record and adds that he has been heavily influenced by Alice in Chains when it comes to writing vocal melodies.

The album will be the singer’s second with the band, after 2013’s self-titled effort.

La Torre tells Metal Nation (via Blabbermouth): “We’re still in the demo thing. We’ve got 15-plus songs that, most of them, are all there. We’re doing pre-production right now.

“I’m hopeful that we can start tracking next month. I was hoping we would be tracking by right now, but we’re just not gonna rush. Our label, Century Media, they’re awesome. Nobody’s up our ass.

“It takes time. And this is the sophomore record with me in the band. That’s a scary thing, because you can like the songs, but you don’t know how it’s gonna be perceived.

“The songs that we have right now are, I would say, melodic. There are some heavy tunes on there that are just, like, really rocking. Overall, I’m hopeful that, when it’s all said and done, this record will have a really good drive, great melodic choruses, great guitar parts, very dynamic. A little more prog.

“I’m finding, as a songwriter, what my stylistic things are, musically. I love Alice In Chains harmonies. They always had these interesting harmonies in their music. And I always find myself, when I’m writing and I’m recording, doing new things, I kind of lean on those types of harmonies. So I’m finding out things about myself as a writer that I didn’t know before. And so it’s a lot of fun.”

Tate’s is now working under the name Operation: Mindcrime.

Queensryche have lined up three UK dates for later this year.