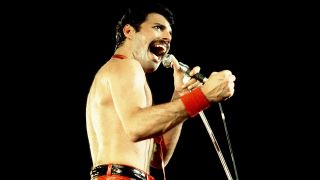 A new online app has been created to let you compare your vocal range with that of late Queen icon Freddie Mercury’s.

The project is a collaboration between YouTube, Google Creative Lab and Google Research in partnership with Queen, Universal Music Group and Hollywood Records.

The result? The FreddieMeter, which has been launched to coincide with the 44th anniversary of the band’s first ever live performance of Bohemian Rhapsody, which occurred at Liverpool’s Empire Theater in November 1975.

The online app, which gives you a score out of 100, analyses the singer’s pitch, timbre and melody and puts it up against Freddie’s using artificial intelligence.

It features four different iconic Queen songs to sing along to: Bohemian Rhapsody, Somebody To Love, Don’t Stop Me Now and We Are The Champions, which are played alongside guided karaoke-style lyrics.

The app also allows you to upload your recording and video online and encourages users to use the hashtag #FreddieChallenge.

The app was released in support of the Mercury Phoenix Trust, founded by Brian May, Roger Taylor and Jim Beach in 1992, which is used to raise awareness and fund the fight against HIV and AIDS.

Queen recently shared the results of their You Are The Champions campaign, which was first announced when Bohemian Rhapsody passed one billion views on YouTube.

The campaign saw more than 5400 people from 110 countries submit video entries to be featured in new Queen videos for Bohemian Rhapsody, Don’t Stop Me Now and A Kind Of Magic. The videos went live in late October and have racked up millions of YouTube views since release.

Meanwhile, Queen and Adam Lambert announced earlier this year they’ll be touring the UK and Europe in Spring 2020 across 16 tour dates, including a five night residency at London’s O2 Arena.