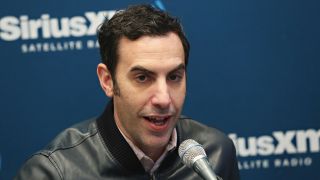 Sacha Baron Cohen says he exited a planned Freddie Mercury role because members of Queen wanted the film to focus on the band’s legacy following the singer’s death.

The comedian was announced as the star of the biopic in 2010 – but he left the project in 2013 amid reports of artistic differences with an unnamed member of the band.

Cohen tells Howard Stern: “There are amazing stories about Freddie Mercury. The guy was wild. He was living a extreme lifestyle. There are stories of little people with plates with cocaine on their heads walking around parties.

“A member of the band – I won’t say who – said, ‘You know, this is such a great movie because it’s got such an amazing thing that happens in the middle.’

“And I go, ‘What happens in the middle of the movie?’ He goes, ‘You know, Freddie dies.’

“I say, ‘What happens in the second half of the movie?’ He says, ‘We see how the band carries on from strength-to-strength.’”

But Cohen adds: “I understand. They want to protect their legacy as a band and they wanted it to be about Queen. But after the first meeting I shouldn’t have carried on.”

They’re set to play a string of European shows in spring, including a headline appearance at the Isle Of Wight Festival.