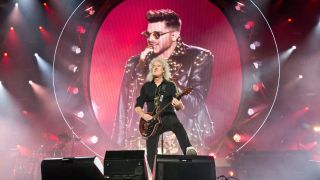 Queen and Adam Lambert will headline next year’s Isle Of Wight Festival.

Their set on Sunday, June 12, will be Queen’s only UK performance of 2016. Former American Idol contestant Lambert has been performing with guitarist Brian May and drummer Roger Taylor since 2012, filling in for the late Freddie Mercury.

May says: “I think Queen at The Isle Of Wight Festival is a date that was long overdue. How incredible to take on this challenge at this point in our lives. With an injection of new blood in the shape of the incredible Adam Lambert, Queen will be ready to tear it up on this legendary stage in 2016. Freddie would have loved it.”

Taylor says Queen will be in “immortal company” after they perform at the festival, which has previously played host to Jimi Hendrix, The Who and Bob Dylan.

Lambert adds: “I’m so excited to be a part of The Isle Of Wight Festival and share the stage once again with the Queen family. I adore making music with Roger and Brian, and am thrilled to help continue their legacy into 2016.”

Queen will be given the Living Legend Award at this year’s Classic Rock Roll Of Honour. The ceremony takes place in London tomorrow (November 11).

Tickets for the Isle Of Wight Festival can be bought at the official website. It takes place from June 9 to 12 at Seaclose Park, Newport.