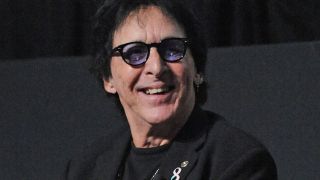 Cancer survivor Peter Criss is to be honoured by the Cancer Research & Treatment Fund.

Founding Kiss drummer Criss was diagnosed with breast cancer in 2008 after noticing a lump on his chest. He had the tumour successfully removed through surgery.

He will be inducted into the Cancer Research & Treatment Fund’s Hall Of Fame as this year’s Cancer Survivor Honoree. The ceremony takes place at New York’s JW Marriot Essex House on November 18.

Criss urges men not to be held back by their “macho” personalities if they expect something is wrong. He says: “Don’t sit around playing Mr. Tough Guy. Don’t say, ‘It’s going to go away.’ It might not and you might not see life anymore and how beautiful that is.”

On his own diagnosis, he told Fox News: “As a man, I thought I must have pulled a muscle, and being in spandex and lipstick and high heels most of my life, I’m pretty used to my body. I just felt like something was wrong and I told my wife so she mentioned it to the doctor. The doctor said if you were my husband I would send you over to New York Presbyterian to see Dr Switzel.

“But that’s a cancer hospital for women. She goes, ‘Yeah but I think you should go there.’ It blew my mind walking into a huge room like this nothing but women, no men, except for their husbands with them. It felt really uncomfortable for me, and it actually scared the pants off of me.”

Criss was inducted in the Rock And Roll Hall Of Fame this year as part of the original Kiss line-up. He had three spells with the band, his most recent coming to an end in 2004.