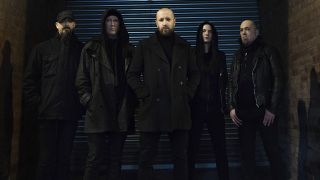 The follow-up to 2017’s Medusa is titled Obsidian and it’ll launch through Nuclear Blast on May 15.

Frontman Nick Holmes says: “One of the most eclectic albums we have done in some time. We have miserable songs, sad songs, slow songs and faster songs. Did I mention miserable?”

Paradise Lost have marked the news by revealing a snippet of their new track Darker Thoughts, which can be listened to below.

Obsidian is said to “eschew its immediate predecessors’ gruesome, myopic approach in favour of a richer and more dynamic deluge of black shades.

"From the deceptive elegance and dual atmospheres of opener Darker Thoughts through to the crushing, baroque doom of war-torn closer Ravenghast, Obsidian reveals a band in masterful control of a broad array of vital ideas.

“Most noticeably, the record boasts several songs that draw heavily from the much-loved, Kohl-encrusted days of 80s gothic rock  – in particular, newly-minted Paradise Lost anthem Ghosts is a guaranteed dance floor-filler at any discerning goth nightclub.”

Obsidian is now available to pre-order. Find details below.

Paradise Lost: Obsidian
Paradise Lost are back with their brand new studio album Obsidian. It's the first since 2017's Medusa, with the band revealing the album news by teasing the new track Darker Thoughts.View Deal