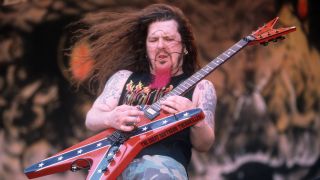 The police officer who ended the murder rampage that killed Dimebag Darrell Abbott lost his career as a result of the aftermath.

But he had to leave the police force three years later, and says he’s never recovered from the emotional pain of the horror incident.

Niggemeyer tells the Columbus Dispatch: “I was diagnosed with post-traumatic stress disorder and severe anxiety disorder.

“I found out that you don’t have any control over your brain. It’s going to do what it’s going to do. Cops are regular human beings – things affect us the same way they affect everyday citizens. We relive it and have to deal with it.”

After being relieved of frontline duty, he was finally removed from the police, although he still works for the city. “It changed my career path, not for the better,” he reflects. He adds: “I’m happy to have been able to end the situation with no further tragedies after I arrived. But it hasn’t made my life any better.”

Club owner Rick Cautela recalls how Gale, who had a history of mental illness, had 35 bullets remaining and was holding an injured roadie hostage when Niggemeyer entered the club and shot him. “Do you know how many more lives could have been taken that night? “ Cautela says. “It was unbelievable.”

But Niggemeyer insists plaudits should go to those in the club who tried to act before he arrived, saying: “When tragedies strike there are people who’ll step up – stand up in the face of death and give their life to save others. They did that with no police there, no guns. Those are the real heroes to me.”

In May, UFC welterweight fighter Matt Brown, who was in the club during the massacre, recalled the events of the night, saying: “Dimebag was on the ground. I hadn’t heard any shots but I saw some blood and I thought he’d been stabbed. We rushed the stage – ‘Come on, let’s get this dude.’ I thought, ‘Somebody’s got to do something.’”

The latest edition of Metal Hammer, on sale today, leads with an in-depth feature on Dimebag and his legacy. TeamRock Radio last night broadcast a documentary marking the anniversary – it’s available on demand now.