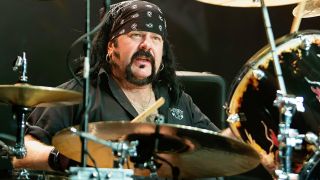 Pantera drummer Vinnie Paul says he’s finally found peace over the murder of his brother Dimebag on stage 10 years ago.

Guitarist Darrell Lance Abbott was gunned down by Nathan Gale in December 2004, while new band Damageplan performed in Ohio. Three others were killed and seven injured before Gale was shot himself.

The tragedy put an end to any chance of a Pantera reunion, following the band’s collapse the previous year. Paul has constantly shouted down suggestions of the surviving members gathering with another guitarist – last month he called the idea “selfish” although he insisted there was no bad blood between him and his ex-colleagues.

Now he tells Fozzy frontman Chris Jericho in Talk Is Jericho: “It was a really hardcore, tragic event – the guy wanted to kill me too. Somehow I was lucky enough to escape that. I’m still here. I don’t want to remember it; I don’t want to think about it.

“It’s hard. It’s hard. But I’ve found peace. I will do everything and anything I can to carry on the legacy and the tradition that my brother always had.”

Paul remembers Dimebag as someone who was intent with “putting a smile on other peoples’ faces.” He adds: “It didn’t matter where it was, when it was, how it was. Whether it was playing his guitar, shaking a hand, signing an autograph, giving a pick, just saying, ‘Hi.’ That was the most important thing in his life.”

And he aims to keep those memories alive in any way he can. “I’m not married I don’t have any kids; I’ve been married to music my entire life,” he reflects.

“Ever since my brother has been taken from me, I feel like I have to live for both of us. I bring it everywhere I go, everything I do, and I think he’s here with us, watching us and enjoying everything that’s going on, man.”

Paul’s band Hellyeah released fourth album Blood For Blood earlier this year, after a lineup change which the drummer said had to happen.