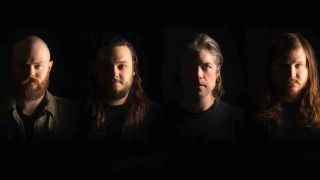 But there’s always been something different about Pallbearer. It’s like the Arkansas four-piece’s Black Sabbath DNA somehow got spliced with that of Pink Floyd, resulting in a strain of atmospheric metal that’s hovering in the clouds rather than rolling around in the dirt.

Which is why we're massively excited by their brand new song Forgotten Days. Sure, it’s a streamroller of a track, ploughing relentlessly forward, and there’s a  monstrously heavy solo in there. But there's a weird liquid feeling to it all, like a tank driving along the ocean floor  – and is it us, or is that a little nod to mid-period Celtic Frost towards the end? There’s some heavy-duty psychedelic strangeness going on in the video that accompanies it too.

“The video for tells the story of an unfortunate traveler who journeys too far, and becomes lost in the depths of both inner, and outer, space. What is real when you cannot trust your own mind?“ says singer Brett Campbell, leaving the rest of us scratching our heads and wonder where we can some of what he’s just taken.

Forgotten Days is a teaser for the band’s new album of the same name – their first since 2017 Heartless.

“We wanted to focus on songs that were visceral and enjoyable to play live – that our audiences would enjoy experiencing,” says bassist/chief songwriter Joseph Rowland. “We’re also getting back to more of the groovier and heavier elements of Pallbearer. Heartless is fairly uptempo and technical. This one is a little more open, it hammers you.”

You can get hammered to your heart’s content when the album arrives on October 23. While you’re waiting check out the video and let us know what they hell’s going on there.