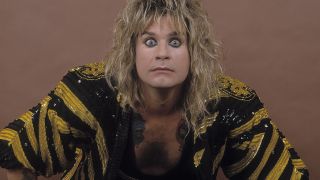 Last week, it was announced that Ozzy Osbourne would release a limited edition vinyl box set celebrating his solo career.

See You On The Other Side will feature all Ozzy’s studio albums and live records, along with a collection of non-LP tracks and a host of other extras.

And in a new interview with Rolling Stone, Ozzy has revealed his least favourite studio album – and it’s 1986’s The Ultimate Sin, the record that featured the hit single Shot In The Dark.

“Everything felt and sounded the fucking same. There was no imagination. If there was ever an album I’d like to remix and do better, it would be The Ultimate Sin.”

As for the limited edition collection, Ozzy adds: “It’s like a trip down memory lane in a lot of respects, especially the album sleeves. That’s the thing I miss now with albums – you used to have a double sleeve with something you could read.”

Each disc on See You On The Other Side will be presented on hand-pressed, multi-coloured splatter vinyl, while the box set will come with 10 newly designed 24 x 36 posters, 12 augmented reality experiences – details of which will be revealed in the near future – and each will be signed by Ozzy himself.

"This one's the most elaborate collection so far," said Ozzy. "It's very well thought-out and well put together. It's got everything in there that you possibly could want and some surprises along the way.

The box set is available to pre-order through Ozzy’s website.