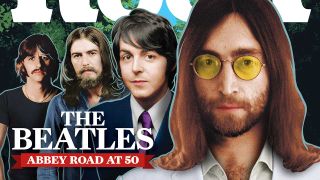 This month it’s been an absolute delight to take a look back at the final album The Beatles made, Abbey Road, as it approaches it’s half-century milestone.

Soon after the “nightmare” of recording Let It Be, the band began their last stand, and although the album was by no means all love, peace, and understanding. 50 years on it's considered by many to be the greatest of all The Beatles' albums. We revisit the recording process, as told by those who were there, and examine each track in detail.

Biff Byford
He might have spent his life working as a coal miner. Instead he formed Saxon, one of Britain’s great heavy metal bands. Read his rags-to-riches story in the Classic Rock Interview.

Status Quo
We collar Francis Rossi and Bob Young, once the ‘fifth member’ of Quo, to talk about early days, reunions, the ‘no Parfitt, no Quo’ debate and more.

Crobot
After a change of scene, a change of personnel and a challenging couple of years, they’re back in business with their heaviest record yet.

Tom Petty
“He was an immortal badass,” says his daughter. To the rest of the world he was a gifted songwriter, singer and performer who led the greatest rock’n’roll band to come out of America.

Jesse Malin
For his gorgeous new album he teamed up with southern heroine Lucinda Williams in his native New York.

Geddy Lee
Attracting huge crowds is nothing new to Rush’s frontman, but the numbers who are turning up to his book signings have genuinely surprised him. We joined him on the road.

Woodstock
Led Zeppelin, The Doors and Jeff Beck turned it down; The Who demanded payment upfront in cash… Fifty years on, read 50 things you didn’t know about mother of all rock festivals.

Kip Moore
Inspired by travels across remote parts of the world, not to mention by the great American storytellers like Seger, Petty and Springsteen, he’s a born searcher.

Raw Power
Check out Kanji Guitars’ Shinjuku Evolver 7, a UK-made custom guitar with its roots in the Far East.

The Stories Behind The Songs: Stone Temple Pilots
Interstate Love Song started out as a bossa nova tune written in minutes, and ended up as a hit single on STP’s multimillion-selling Purple album.

Q&A: Mitch Ryder
The R&B legend on being an influence to many, the energy of his records, and being hurt by the arrival of psychedelia.

Six Things You Need To Know About… Henry’s Funeral Shoe
You don’t meet many Welsh noiseniks who are dodging aliens and taking on the Nazis. Here’s maybe the only one.

Buyer’s Guide: Walter Trout
Here’s the best of the indestructible bluesman’s studio catalogue to catch in your net – and one to throw back.

The Soundtrack Of My Life: Danko Jones
The Canadian headbanger on the special records, artists and gigs that are of lasting significance to him.

Classic Rock 266 is available in UK newsagents now, and is also available to purchase online.