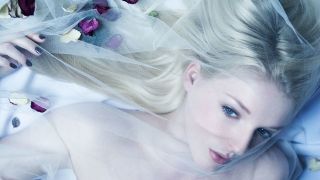 Having been born in San Diego, grown up in Oslo, Norway and recorded her new album, Wistful, in Paris, with contributions from Alcest frontman Neige, Sylvaine’s background is as roving and nomadic as the music itself.

Carrying a rarefied Nordic air, but steeped in the lush, luminous sound of mid-late 80s 4AD Records and the delicate shoegaze currents that have channelled their way into the post-black metal scene the past few years, Wistful’s heartfelt reveries are essentially a dissolution of co-ordinates and an immersion into pastoral, redemptive realms that may border on black metal but enter into deeply personal territories that resonate on their own terms.

With the album due out on May 13 via Season Of Mist Records, we have an exclusive stream of Wistful in its full, entrancing glory. Says Sylvain herself of the album, ‘To me Wistful is an album holding extremely personal moments and conveys a heightened state of alienation, frustration, and resignation, partially as a result of loosing contact with the known, while big changes were occurring in my life during 2014. The record showcases a more focused expression, with songs that all relate to one another in a more natural way than on my first full-length, Silent Chamber, Noisy Heart, getting me closer to what I imagined to be the sound of Sylvaine when I started the project. Now I am already working on my third album, but cannot wait to see what people will make of this dark, lush piece that comforted me on those days when I felt the most lost some years ago.”

Unchain your heart and delve into Wistful below!