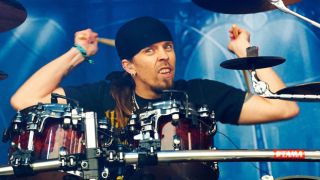 Nightwish drummer Jukka Nevalainen has decided to "step aside" from the band's eighth album and upcoming tour work as he continues a long battle with chronic insomnia.

He’s concluded that his health issues mean he’s not able to do what’s required of him – and admits he’s “indescribably sad” to say he doesn’t know if he’ll ever be back.

Wintersun drummer Kai Hahto has been drafted in to record the follow-up to 2011’s Imaginaerum, but no decision has been taken over who’ll be behind the kit when the band hit the road.

Nevalainen says: “For a number of years I have suffered from occasional but very difficult insomnia, my unwanted companion during many of our tours. I’ve done my best to try to control it, or at least to cope with it. There’s not much information available on why some of us suffer from sleeplessness. There is no 100% cure for the problem.

“During the last month it has become evident that due I can’t fulfil my duties as a musician in the way that I’d want, and with the precision the music deserves. Thus I have decided to step aside from Nightwish during the recording of the forthcoming album and the subsequent tour.”

He’s thanked Hahto for stepping in, and says he’ll remain involved with the band’s day-to-day management. He continues: “The dearest and the most important thing – playing – is, for the time being, not possible. Time will tell what the future holds.

“It is just part of the constant, inevitable ebb and flow of life. The sad things are part of it as well as the beautiful, unforgettable experiences and adventures that I’ve already had. Surely there will still be many adventures ahead, too.”

Nightwish mainman Tumoas Holopainen last month confirmed the band were working on a new album, their first with Floor Jansen and Troy Donockley as permanent members. They aim to release it before next summer.