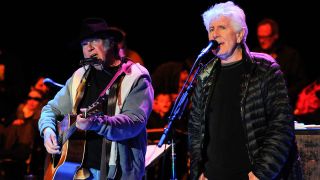 Neil Young has confirmed that he did shout the catchphrase “more barn” from a rowboat in the middle of a lake during a Harvest listening session with singer-songwriter Graham Nash.

The story, which has spanned over four decades, appears in the booklet of Crosby, Stills & Nash’s 1991 debut CSN. Nash previously recalled his surprise when he was invited onto a rowboat in the middle of a lake at Young’s ranch, south of San Francisco, to listen to his then-upcoming album.

Young tells Huffington Post: “Well it’s funny, it’s just a little thing that happened one day and it keeps growing and getting crazier. But I had the left speaker, big speakers set up in my house with the windows open.

“And I had the PA system – that we used to rehearse and record with in the barn where I recorded Alabama and Words and a couple of other things – playing the right-hand channel.

“So, we were sitting in between them on a little lake and that’s what we were doing.”

When asked if he shouted the infamous line, Young replies: “Yeah, I think it was a little house heavy.”

Neil Young is to appear at California’s Desert Fest alongside The Rolling Stones, Paul McCartney, Bob Dylan and Roger Waters this October.