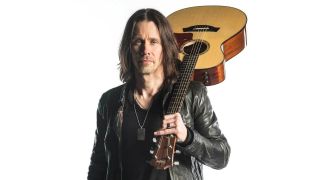 Myles Kennedy is one of the most modest rock stars you could meet. Not for the Alter Bridge singer the self-aggrandisement that usually comes with the job – the Spokane, Washington-born Kennedy has neither the ego nor the inclination to big himself up. But still waters run deep, as his guide to life proves…

I have a lifelong love affair with music. It started when I was really young. I remember being four or five years old and seeing Stevie Wonder on Sesame Street, and – bang – that was the beginning for me. Music is oxygen. I can’t even fathom a world without it, it’s definitely the most important element in my life, besides family of course. How long can I go without listening to music, or playing it, or even thinking about it? Maybe five hours [laughs]

Some people thrive on fame, and love the way it feeds the ego. But I think it’s very odd. It doesn’t interest me at all. To be so famous – which I’m definitely not – that you can’t go to the grocery store is kind of unthinkable. Do I get recognised a lot? Sometimes. I actually got recognised other day when I got off a plane in London. But it’s not something I get a thrill from. The nice thing about it is that you know your music has reached someone so far away.

I had a very religious upbringing, but I have issues with religion. I was initially raised as Christian Scientist, which is pretty hardcore. They don’t allow doctors, no surgeries, they believe that if you’re sick you will be healed by God’s will, divine power. That’s why my father passed away when I was four – he was sick, but he held steadfast with his beliefs and wouldn’t see a doctor. After my father died, my mom married a Methodist minister, so we become Methodists. My stepfather is a very liberal thinker, but it still doesn’t work for me. I’m with Karl Marx: religion is the opiate of the masses.

Politics is as polarising as things get in right now. I think the future looks very chaotic right now, especially in America. I’m kind of concerned as far as the world in general, goes. But we’re humans and we’re not perfect, and I do have faith that humanity will figure it out eventually. I just wish they’d do it sooner.

I think about death a lot. I think it’s because I lost my dad when I was so young. It messed me up. It made me very anxious. I’m an anxious person, and that is a big part of it. Death is something that’s always been in the back of my mind. I don’t want to say I’m frightened of dying but I certainly want to enjoy being above ground.

Money is absolutely not a prime driver in my life. If you have enough, and you can afford to put food on the table. It seems redundant. The most expensive thing I’ve ever bought that isn’t a house or a car was a painting of David Bowie. It cost $5000 – to some people that’s not a crazy amount of money, but to me it’s definitely a crazy amount of money. Do I see myself as a rich man? Oh, absolutely. I’m rich with love [laughs]. I feel like Donald Trump on that front.

Alter Bridge’s new album, The Last Hero, is out now