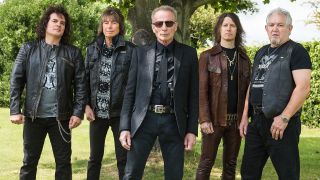 Now just two years away from a 50th anniversary, UFO are still recording and touring. Drummer Andy Parker sets the scene for their latest gigs, including a Special Guest spot at the Ramblin’ Man Fair.

UFO haven’t played at Ramblin’ Man before. What do you know about the event?

I’ve heard good things, and Phil [Mogg, frontman] does his homework. Even after all these years he’s still looking out for us.

You’re ZZ Top’s Special Guests on the Main Stage. Have UFO played with those guys before?

No, but we’ve just finished a covers album and we’ve done one of their songs, Just Got Paid. It took us a long time to persuade Phil to do a covers album. A lot of lists were made and torn up!

Another one on that album, Break On Through (To The Other Side) by The Doors isn’t an obvious choice?

You wouldn’t think so. Ours isn’t a bossa nova like the original, we’ve rocked it up.

Phil recently revealed that UFO are considering a tour playing the double-live album Strangers In The Night in its entirety.

It’s being discussed. We were asked to do it in Japan but it didn’t happen. We’ve added up the song times and it would work.

In fairness, doesn’t the band already do most of those songs?

[Laughs] Yeah, it wouldn’t be too different, but there are a couple of those gems that we don’t do.

You must be aware that some fans want to hear more from the UFO era that featured Tonka Chapman on guitar?

We’re not against that, and we’ve tried adding some, but the truth is that they don’t go down very well. After two or three nights of dying a death, we put in something that’s more popular.

Are you used to seeing Phil Mogg with a bald head yet?

Yeah. He’s made it a part of the show. He picks out guys in the crowd and tells them: “You’re part of the no-hair club.” They love it.

Do you still believe that rock’n’roll keeps you young?

Yeah. Look at Paul Raymond [rhythm guitar/keyboards] – he’s seventy-one! You wouldn’t know it. And Phil’s in better voice than ever. There are a few more years in us yet, hopefully.

Have you read the autobiography of UFO’s former bassist, Pete Way?

The book’s lack of input from any of the current UFO members is rather surprising.

Phil still genuinely cares for Pete, but he just doesn’t want to go down that road. We all miss the fuck out of him, but Phil and Pete together was a recipe for the perfect storm.