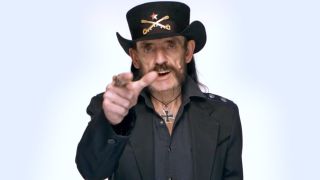 Lemmy in the film

Late Motorhead icon Lemmy is featured in a TV public service announcement that aims to raise awareness of human trafficking.

He delivers part of Rockers United’s message alongside a team including Nikki Sixx, who warns: “One million children a year in the US are kidnapped and forced into a life of sex slavery.”

The charity was created by rock photographer Kevin Estrada. He recently said: “Human trafficking is the second largest criminal industry in the world today, second to drug activity. This is tragically happening to nearly two million girls worldwide every year.”

Motorhead release live album Clean Your Clock – recorded during Lemmy’s final tour last year – on May 27. The icon’s life will be celebrated at this year’s Metal Hammer Golden Gods in London on June 13. Tickets are on sale now, priced just £6.66, while voting for the annual awards is currently open.