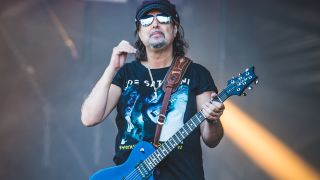 And in a new video interview with Nuclear Blast, Campbell reports that he’s been planing on releasing a solo record for 20 years.

He says: “In this very studio I was upstairs at one point and I was reading a magazine from 1999. In it, I’m talking about doing my solo album – and I hadn’t done any of it!

“I’ve been threatening to do this album since at least 1999.”

He adds: “I wrote a bunch of songs and when it started to take shape, I asked some friends and acquaintances and people I’ve admired for years if they wanted to do it.

Campbell will also hook up once again with The Bastard Sons for a European tour, with dates planned throughout the remainder of 2019.