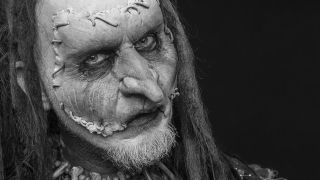 Mortiis has announced that he’ll release a new album early next year.

It's titled Spirit Of Rebellion and is said to be a re-interpreted expansion and continuation of the 1994 Era I classic Ånden som Gjorde Opprør.

The dungeon synth godfather says: “I had to fend off a lot of demons to get to this point. They’ll be back, they always come back, but at least my vision is no longer clouded.

“When I was working on re-interpreting my old music for the Cold Meat Industry Festival in Stockholm almost two years ago, I had no idea that I’d eventually create an – almost – new record, nor that a section of it would be used for my first dungeon synth video since 1996. But here we are.”

Mortiis will head out on tour across Europe from later this month and then cross the Atlantic for a run of US shows.

He explains: “I’m very much looking forward to returning and touring North America again. This being a sort of part two of the US tour I did earlier this year, of course with different cities, but hopefully, it will turn out to be as cool as the last one I did.

“On the last US run, we jumped a fence in a park and sawed down a bunch of cool-looking trees, threw them into a van before anyone knew what happened, then rushed them back to the venue for ‘post-processing’, a couple of hours before the show.

“I guess this will also be part two of, ‘How are we going to get hold of those creepy trees?’ that we have on stage as part of the show. So yeah, another adventure awaits. That's for sure!”

Further album details will be released in due course, but for a taste of the new material, check out the video for Visions Of An Ancient Future below.