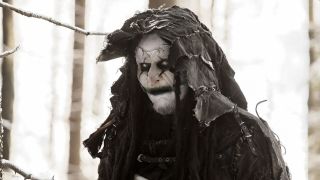 Fantasy worlds aren’t exactly unknown to the metal scene, but you’d be hard pressed to find an artist who has created a world as extensive, or has immersed themselves in their creation as much as Norway’s Håvard Ellefsen, aka Mortiis. The prosthetic goblin mask and ‘dark dungeon music’ that comprised what became known as Era 1 were gateways to a Tokein-esque vision that captivated many, but that world got fleshed out to its fullest extent in the book he released in the early 90s, Secrets Of My Kingdom.

Containing lyrics, including for the tracks he’d written during his time in Emperor, I Am The Black Wizards and Cosmic Keys To My Creations And Times that were already considered black metal classics, alongside various other writings copious illustrations, Secrets Of My Kingdom was an obsessive act of world-building that became a cult collector’s item, its limited print run selling for hundreds of pounds.

Thanks to Crypt Publications, run by Hammer scribe Dayal Patterson, the book is back in print, in a newly expanded edition as Secrets Of My Kingdom: Return To Dimensions Unknown. Now with 100 extra pages that include new writings and illustrations, a career-spanning interview with Mortiis himself, various testimonials and a gorgeous new cover by David Thiérrée, whose lushly detailed depictions of folkloric trolls offers a symbiotic partnership, this is a long-overdue opportunity to delve into the mind of one of extreme metal’s true mavericks.

We took the opportunity to talk to Mortiis about the book’s resurrection, the nature of obsession, the links between fantasy and the psyche and his perspective on his time in black metal’s flagship band.

For you personally, what was the fundamental purpose for creating Secrets Of My Kingdom in the first place, and what was the initial impetus behind the extended reprint?

“Dayal was definitely a driving force in terms of getting me motivated to put this book out. It took me a long time to even mentally get over my hang-ups over a lot of my older material (I had a very hard time being able to look beyond the lacking recording and playing techniques, and simple seeing it for what it was, which was some pretty unique and original, not to mention strange, music and visuals), and by the time I was finally able to break down my own psychic barriers surrounding the entire decade that was the 90s, Dayal had been planting the idea of re-releasing Secrets Of My Kingdom in my mind, numerous times.

“As far as the initial reason for it even being in existence… Secrets Of My Kingdom is a collection of lyrics, writings, and ideas that collectively becomes the place I created to base those early Mortiis albums on. Thinking back, I was a big fan of 70s albums, the big concepts, etc and I think I wanted to take things a step further… What if a concept album didn’t have to end when the last note played out? What if the story just kept going on and on? That was sort of the mindset I had at the time. Just keep going… I wanted to create a world from where I could draw endless amounts of material and concepts and stories.”

Secrets… is an immersive and pretty obsessive endeavour. How much of your life was given over to creating it and to what extent did you have to remove yourself from the outside world?

“I think I was naturally removed from the world as a person. Not necessarily by choice. but, to some extent, by natural selection. As a kid, I wasn’t unpopular, but I wasn’t really popular either… I have memories of being excluded from the playground by other kids, so I think in a sense I felt excluded and different, and of not fitting in, as far back as my early years of school. I never did fit the mould, though never by choice. Things just panned out that way.

“Secrets… was written over a span of years, so it’s not like it took this big, crazy chunk out of my life. I think I had a lot of time to think up these new weird ideas, and then put them down on paper. It was never a question of going nuts and writing 30 pages a day. Having that said, however, the way the whole ‘parallel world’ got started, was a strange span of about 10 days in the summer of 1992, when I wasn’t unable to sleep, found myself writing the fundamental texts for everything that came after. I Am The Black Wizards and Cosmic Keys To My Creations And Times and about 10 other texts were written during sleepless nights back then. Of course I was in Emperor at the time, and the initial idea was to base the debut Emperor album around these texts and put the album out of Deathlike Silence Productions [Euronymous’s label at the time]. That never happened for obvious reasons, then I got kicked out of Emperor and brought the lyrics with me.”

Obviously Tolkein was one of the main inspirations, but how did you go about making sure that you had created a distinct world of your own?

“Well, I don’t really think I did… at least I didn’t think about it too much. I think it came kinda naturally, as I was progressing along with fleshing this strange world out, I was getting more and more creative (not to mention weird) and just sort of naturally drifted into territory I felt was pretty unique. I don’t think there are a lot of other books out there referring to screaming mountains, spider stars, a wanderer doomed to wander for all eternity, and so on, but then again, I rarely pay attention to anything going on, so what do I know?”

How closely did you work with the artists in the book? Was there something special about seeing these personal visions fleshed out?

“Well it’s always a special moment when something you’ve created out of nothing, comes to life. Whether it be a cover artwork concept, or someone interpreting your writings and visualising it. It adds a very special dimension, and all of sudden it has meaning. I think other artists (of any sort) would agree with me there.

“I didn’t so much work closely with the artists, as simply providing them with the lyrical/text content that I thought would benefit or make the most sense to visualize. As strange as it sounds, I don’t really believe in dictating art, at least not too much, haha! I will guide and direct when and if I have to, or when I get super-inspired by something… That happens, someone like David Thiérrée (whom I have worked with a lot lately) will deliver something that is 75% on point, and absolutely asskicking, then I’ll usually put on my ‘director’s hat’ and make sure it’s guided home to the 100%.”

Looking back on the book now, do you see any recurring themes that proved to be personal metaphors? How much symbolism do you see there, and what did you feel they were channelling?

“Towards the end of writing the book, and like I said in the beginning, this book was years in the making, it’s been a bit like building your dream home – it doesn’t necessarily happen in a month, it can take years, you chip away at it when and if inspiration grabs you/ Towards the end of writing the book, and this is sort of a well-documented thing, at least in past interviews I’ve done, I was starting to hit that infamous depression of mine, that estranged me from the entire decade of the 90s, for a long time. At that point, some of the last lyrics or texts I wrote, were very metaphorical in that they questioned the validity of what I was doing, and whether I was just wasting my time, and whether it, or I, had any value or meaning. It’s pretty bleak stuff when I look back at it. It was a very dark place for a person to exist in, and I stayed there for years after that, and I hope I never have to go there again.”

A lot of thought clearly went into creating the structure of the world that Mortiis represented, not least in the diagrams of the elements and the hierarchies, which are similar to magical systems such as the Sephiroph? How interested were you with the occult at the time, and how much was drawn from them?

“I get this question a lot, and I invariably have to admit that, I was never well-versed in the occult or any sort of magic or philosophy. I had this sort of crazed ego going on where I deemed myself as some sort of god; I was pretty arrogant. That doesn’t mean I wasn’t interested. I was aware of a lot of that sort of stuff, but I didn’t study it. I always loved the symbols and the mystery of the occult, but I was never a student of it. Beyond trying to read a few books. I tried to read and understand books like The Magus, Crowley, books on witchcraft and various types of magic, but it never really stuck. I just invented stuff as I went along.”

Visually, the creation of the Mortiis figure went through various stages of evolution and fleshing out. Did that make a difference to how you related to this alter-ego, or give you more scope for understanding what it represented?

“On the visual side of things, I was really just always looking for ways to try to make things look better, and more striking. I grew up on larger-than-life, image-heavy bands like Kiss. WASP and Alice Cooper, so to me that was always a huge part of the whole experience of being into a band or artist. Even when I wasn’t doing the mask, I wanted the visual side of the band, or myself, to be at the very least, interesting. I digress. I think perhaps to some degree, once the much more professional mask got into the equation, around 1999, I probably became much more self-aware, in terms of knowing that I had stepped up the game visually, but I’m not sure that it made me feel different about Mortiis, other than the fact that it was a better looking monster now, than it used to be, haha!”

You contributed the lyrics for two of Emperor’s most famous songs, I Am The Black Wizards and Cosmic Keys To My Creations And Times – to what extent do the feel ‘yours’ or have they taken on a different life of their own, if only because they’ve fallen within the scope of your former bandmates?

“I don’t think about that too much. I guess it’s two old. I am aware that they are considered classics by a lot of their fans, though I wonder how many know that they are in fact two pieces of a very large puzzle. Like i said above, the original idea was for those two lyrics, and the other 10-12 ones i wrote in the same time span, that 1992 summer, to form an Emperor concept record. I think we even started making some of the music. The Candlelight mini-LP happened shortly after that, and then I was out on the streets, with no band and a bunch of lyrics in my back pocket, trying to figure out what went wrong, haha! They went their way, doing their thing, which obviously worked very well for them. I went my way, and did OK too.”

Order Secrets Of My Kingdom: Return To Dimensions Unknown from the Cult Never Dies shop here!