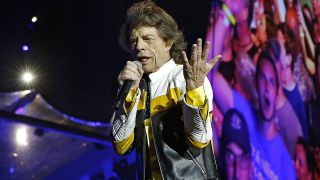 Mick Jagger is set to return to the silver screen in new heist thriller The Burnt Orange Heresy.

The Rolling Stones frontman will play the role of wealthy art collector Joseph Cassidy in the Giuseppe Capotondi-directed film, which has been adapted from Charles Willeford’s 1971 novel of the same name.

The movie, which also stars Donald Sutherland, Claes Bang and Elizabeth Debicki, will close the 76th Venice International Film Festival on September 7, with Jagger filming his parts before his heart surgery in April this year.

Jagger avoided major surgery by having a “minimally invasive procedure” to replace a heart valve in New York and later checked in to give fans an update on his health, saying he was “on the mend.”

The Rolling Stones North American No Filter tour was postponed as a result, but the shows were rescheduled with the next concert taking place later tonight in Philadelphia.

In April, the Stones released the 36-track compilation Honk, which charted the band's career from 1971 through to 2016.

Rolling Stones: Honk
This new 36-track compilation charts the Stones' career from 1971 through to 2016. It features 36 tracks along with a bonus disc of live cuts featuring collaborations with artists including Dave Grohl.View Deal