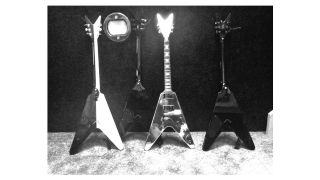 Michael Schenker’s next Temple Of Rock album is in disarray after thieves broke into his studio and stole guitars, equipment and the computers containing his recorded work to date.

But vocalist Doogie White has vowed the band will get over the disaster – while appealing for help to recover the missing property.

The theft took place between Friday evening and Sunday morning at Kidroom Studios in Greven, Germany, where tracking was underway for Spirit On A Mission. Among the stolen items are four Schenker guitars including a custom Dean V in chrome – one of only three ever made.

White tells TeamRock: “We’re a bit fucked and a bit pissed off. I only got home on Friday after laying down the vocals, and Herman Rarebell just arrived to track the drums. The thieves broke in through skylights and stole a bunch of guitars, and also the computers containing the tracks. Then we found they’d also taken the backups.

“There’s still some confusion over whether we even have rough mixes of the songs. It remains to be seen what, if anything, we have left to listen to and work from.”

White reports the band are grateful for the support shown by fans who have spread the word about the stolen instruments. He says: “The ‘criminal masterminds’ behind this sorry affair just saw guitars and computers. They have no idea how difficult it may be to offload them.

“Any reputable dealer will know they’re stolen. No fan will buy them – they’re more likely to knock the seller out and hand them back. And casual players won’t want them. A Dean V ain’t for doodling on in front of the TV.”

A police investigation is underway while Schenker and co consider their own next steps. “The temptation is to say, ‘Return that which you have taken and you can go free, no questions asked,’” says White. “However much that sticks in our craw, it may be the course of action to take. We’ll see what happens over the next few days.

“I spoke to Michael this morning and he’s very matter-of-fact about it all. We agree there’s not much we can do, other than knuckle down and get on with what needs to be done. We’ll refocus, regroup and have a fresh plan in a day or two.”

• Anyone with information regarding the crime is asked to contact Greven police on +49 2571 9280.