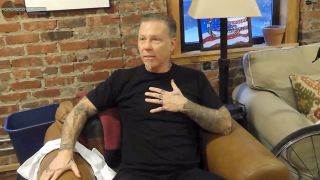 Metallica frontman James Hetfield has told how his lifelong fear of responsibility has caused problems with his addiction recovery.

And he says turning 50 last year has given him new concerns about being thought of as a role model.

In August he discussed his method for relying on fans when he suffered a lack of confidence on stage.

Now Hetfield says in a video for addiction service Road Recovery: “I’ve been afraid of responsibility my whole life – not wanting to take responsibility for myself.”

He recalls an elementary school summer session where he was told to work with a group of fellow pupils on a film project. “I was, ‘Hey, how about we do this?’ and all these ideas. Then they said, ‘Okay now, choose your leaders who’s responsible for the stuff.’

“I shrunk, man. I got scared. The group was like, ‘You’re the leader because you had all the ideas.’ I was like, ‘No, no, no’ – and I bailed. I was afraid of responsibility. Afraid of failure, maybe; afraid that I didn’t know what I was really doing.”

He admits: “That’s kind of what it’s like for me in recovery at times. Afraid to take on responsibility of sponsees, allowing myself to stand up and shine in that way.”

“When you think you’re a role model, guess what? You’re not. Being yourself and the best self you can be, then maybe you’ll be a role model to somebody.”

Metallica – who’ll headline the Reading and Leeds twin festivals next year – recently re-released their notorious 2004 documentary Some Kind Of Monster, which detailed Hetfield’s early attempts to deal with his addiction issues. He recently admitted the movie was still hard to watch, but added: “I learned a lot about what I don’t like about me, which was good.”