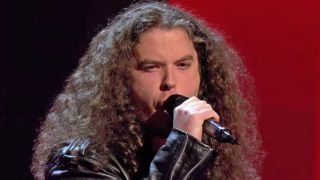 A metalhead contestant on the Irish edition of TV talent show The Voice won a clean sweep of judges’ approval with a powerful rendition of Led Zeppelin’s Immigrant Song.

John Bonham’s performance saw all four judges pitching to have him on their team. In the end, the 28-year-old from Dublin chose former Westlife singer Kian Egan as his coach.

After his performance led to all four experts turning their seats to signify they wanted him to progress, Bonham had to explain that having the same name as the late Led Zep drummer was merely a coincidence.

And he says he would never have compromised by singing a “safer pop song.”

He tells TeamRock: “The first thing they asked was whether that was my real name. It’s a total coincidence, but I’m obviously a big Zeppelin fan.

“I only wanted to go through on my own terms. I didn’t see the point in doing a safer pop song just to try get through. I thought I might as well be me.

“It’s a tough song to sing because of the range in the vocals. It actually hadn’t gone so well when I was practising, but the big arena and the crowd gives you such adrenaline and it worked out.

“I definitely did not expect to go through, I thought I wouldn’t be what they were looking for. I didn’t think many of the audience would even know Immigrant Song, but when I started headbanging halfway through, they all went crazy.”

Judge Niall Breslin – aka Bressie – was the first to turn his chair and John admits the excitement almost made him lose his way briefly, before he got back on track. “By the time all four had turned, I was full of confidence,” he says.

Bressie was lead singer with Irish rock band The Blizzards and many expected John to choose him. But he went with Egan after the boy band icon proved his rock credentials.

John says: “Kian said the first album he bought was Metallica’s …And Justice For All and also mentioned Faith No More and Iron Maiden. I said to him, ‘You had me at Faith No More.’”

John – who sings with Dublin band Old Season – goes into the show’s ‘Battle’ stages this weekend, to be broadcast on Irish channel RTE.