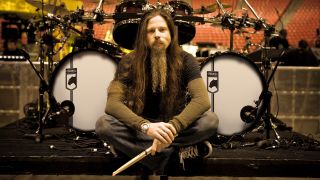 Chris Adler says he thought he was the victim of a TV prank when he was invited to join Megadeth for their 15th album.

The Lamb Of God sticksman was finally confirmed yesterday as the man behind the kit for Dave Mustaine’s next release.

He’s replaced Shawn Drover in a guest capacity, who quit within hours of guitarist Chris Broderick’s departure in November.

Adler says: “Megadeth was the game-changer for me. There’s no doubt I would not be doing what I’ve been doing for the past three decades had I not stumbled across Killing Is My Business, and the Bible of all metal, Peace Sells.”

He adds that he’s been in touch with Mustaine and bassist David Ellefson since Megadeth and Lamb Of God toured together 10 years ago.

“When Dave called and asked if I was interested in making a thrash metal album with him, I felt like I must have been on a hidden camera show,” says the drummer.

“I’m coming into this on fire. The goal here is to make the very best thrash album we can. Together I believe we can do something very special.”

No completion or release dates have been confirmed for the follow-up to 2013’s Super Collider. Megadeth recently postponed a run of shows in August to allow themselves more time to work on the record.