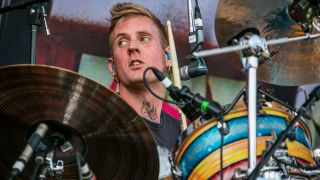 It’s titled Red Death and has been inspired by the new DC Comics’ graphic novel Dark Days: The Road To Metal, which features superheroes including Batman, Aquaman and The Flash.

Dailor sings on the track and is joined by Tyler Bates on guitar, Mike Elizondo on bass and drummer Gil Sharone.

Dailor says: “Super stoked to be part of this amazing musical collaboration. Always been a fan of anything Batman related and DC Comics as a whole, so the chance to be connected to that universe is a dream come true.”

Dark Days: The Road To Metal was written by Scott Snyder and James Tynion IV and illustrated by Andy Kubert, Jim Lee and John Romita Jr and is the prologue to Dark Nights: Metal.

The graphic novel is now available to purchase from Amazon, with the digital version is out on May 22.

Last month, Mastodon released an animated video for their Emperor Of Sand track Clandestiny and are currently on tour across the US.