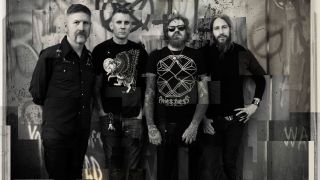 Ahead of release, Mastodon have released their contribution to the Game Of Thrones mixtape with new track White Walker.

Veering deep into whimsical, proggy territory, the title is a reference to the icy undead bastards from Beyond The Wall – although the track is nowhere near as gnarly or likely to decapitate you.

The mixtape – dubbed Catch The Throne Vol. II – also features Killswitch Engage and Anthrax and is out 17th March.