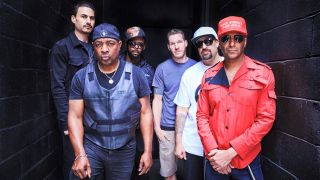 Rap-metal supergroup Prophets Of Rage have released a brand new single, Made With Hate.

The track, which doesn’t appear on their self-titled debut album, lands ahead of the band’s UK and European tour, which begins on July 13 in Spain.

“As with many songs songs, Made With Hate was formed out of a conversation amongst ourselves about the level of passion fuel it takes to create,” says co-frontman Chuck D. “Especially when attacking something of HATE. You must create the energy to hate ‘HATE’. To have PEACE you have to despise Hatred with a passion for Peace and attack it. You can’t have hate take over anything especially history, so you have to fuel yourself to attack in thought word and deed with equal passion.”

The band, which features members of Rage Against The Machine, Public Enemy and Cypress Hill, are currently working on their second album, due for release in 2020.