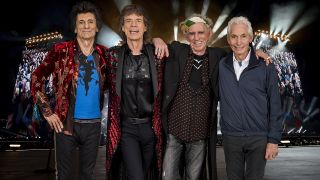 The song was finished in isolation in Los Angeles and London, and was the band's first release of original material since 2012, when Doom And Gloom and One More Shot were included on the compilation album GRRR!.

Now 28-year-old Brazilian DJ and record producer Alok has taken the track and given it a fresh makeover, which, as you would expect, is quite a departure from the original.

Speaking about the original Mick Jagger said: “So the Stones were in the studio recording some new material before the lockdown and there was one song we thought would resonate through the times that we’re living in right now. We’ve worked on it in isolation. And here it is – I hope you like it.”

Keith Richards added: “So, let's cut a long story short. We cut this track well over a year ago in L.A. for part of a new album, an ongoing thing, and then shit hit the fan Mick and I decided this one really needed to go to work right now and so here you have it. Stay safe!”

Meanwhile, the Stones’ weekly Extra Licks series is set to continue this weekend with the band broadcasting their show from the Fonda Theatre in Hollywood from May 20, 2015.

It’ll be shown on band’s YouTube channel this Sunday (May 17) at 8pm BST and is part of the streaming giant’s Stay Home campaign – and is in partnership with Eagle Rock Entertainment.

Living In A Ghost Town is also available in limited 10-inch orange and purple vinyl editions, which will be released on June 26, and a CD, due on May 29.