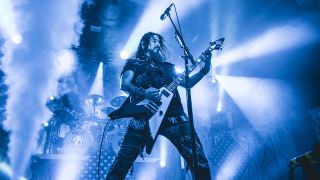 Machine Head have released a video for their new single Do Or Die.

The track sees frontman Robb Flynn and bassist Jared MacEachern hook up with drummer Carlos Cruz, with the promo launched to coincide with the start of Machine Head’s European tour.

Flynn says: “Do Or Die is three minutes and 45 seconds of unadulterated, neanderthal rage,” while Cruz calls it, “the most extreme song in the Machine Head catalogue.”

The band are gearing up to play in Wuerzburg, Germany, tonight (October 11) on the Burn My Eyes 25th anniversary tour.

Each show is split into two sets. Part one sees Flynn and MacEachern performing a selection of classic tracks alongside new members Vogg Kiełtyka and Matt Alston.

The second set see original members Chris Kontos and Logan Mader take to the stage to play Burn My Eyes in full.

New guitarist Kiełtyka says: “It’s a huge privilege to be a part of this amazing tour. After rehearsals and pre-production in Germany, I can confirm there is no way you can miss out on this."

Drummer Alston adds: “I’m so stoked to be part of the Burn My Eyes 25th anniversary tour.

"Being on stage with Robb, Jared, and Vogg, performing songs I grew up listening to and in front of thousands of Head Cases is just amazing. And then being able to have my face melted by the Burn My Eyes show... it just doesn't get much better than that.”

After the current run of shows, Machine Head will return to the UK, Europe and Russia in 2020 for further dates.